"When you make money off my name, you learn my damn name."

From Adrienne Crew's latest piece, on time travel fiction. Third installment of ten in her Afrofuturism series on Hilobrow.

For an American of African descent, the notion of traveling to the past is a painful one. In no matter which time period a person like me might arrive, if I’m in Europe or a European colony, I might very likely be raped, enslaved, lynched, or all of the above. I’ve asked African American friends about which past time period they’d most like to visit, and they always agree with me that the present is the best. Brandi Brown, a young African American stand-up comedian who formerly worked in advertising, once joked that when she was asked, “Don’t you wish you could go back and work in the time of Mad Men?, her response was: “I would not like that at all! I’m a huge fan of my current rights.” The very idea of time travel, for African Americans, heightens our anxiety about the history of anti-black white supremacy in the world.

Please spread this. So so so many people are trying to run websites without the slightest idea how to keep a happy, healthy dev. It breaks my heart to see mishandled devs, who should be great additions to any website, instead end up turning on high-contrast mode permanently, removing pictures of sand dunes and babies with a broken p0rn detecting AI, and sometimes just deleting entire users, features, and posts accidentally. This is not cute. Do not get a dev if you cannot care for them properly. This has been a PSA.

I do appreciate a good language joke. South Africans, particularly Xhosa-speakers, really seem to have liked this one too.

Trevor Noah may have got applause from the audience at the Oscars on Sunday night for his speech about Wakanda, but local fans were crying with laughter at the shade the comedian was actually throwing in a Xhosa-infused joke.

Trevor took to the Oscar's stage to present Black Panther as one of the Best Picture nominees at this year's award ceremony and mocked those who thought Wakanda may be a real place.

"Growing up as a young boy in Wakanda, I would see T'Challa flying over our village, and he would remind me of a great Xhosa phrase. He says 'abelungu abazi ubu ndiyaxoka' - which means 'In times like these, we are stronger when we fight together than when we try to fight apart'."

His "inspirational" story drew applause from those who did not understand Xhosa.

Click through to see the video and get the accurate translation.

Have you seen this or signed up for it? It requires either a CharlieCard or a CharlieTicket number, and your responses are linked to that.

The MBTA Customer Opinion Panel is a group of several thousand customers who have signed up to tell us about their experiences every few months.

Customers fill out an initial signup survey that gives us some basic information, and then receive a satisfaction survey every month which takes about 5-10 minutes to fill out. We use these responses to understand how we’re doing in delivering many aspects of our service, including reliability, cleanliness, maintenance, and more.

Filling out the satisfaction survey allows customers to enter a monthly drawing for a LinkPass.

The Customer Opinion Panel is open to all MBTA riders. Your input will help keep us focused on what matters most to you as we work to improve our service.

At least the firmware update didn't brick the shoes if you're using the iOS app. Just the Android version of Nike Adapt.

(Why would I pay $350 for shoes that need a mobile app for full functionality?)

One user writes, "The first software update for the shoe threw an error while updating, bricking the right shoe." Another says, "App will only sync with left shoe and then fails every time. Also, app says left shoe is already connected to another device whenever I try to reinstall and start over."

"My left shoe won't even reboot." writes another. One user offers a possible solution, saying, "You need to do a manual reset of both shoes per the instructions."

One irrational fear I have when passing under an elevated track is that something will fall on me.

I suppose perhaps it's not that irrational?

65th Street and Roosevelt Avenue, Woodside, Queens, underneath the 7 train, this afternoon: 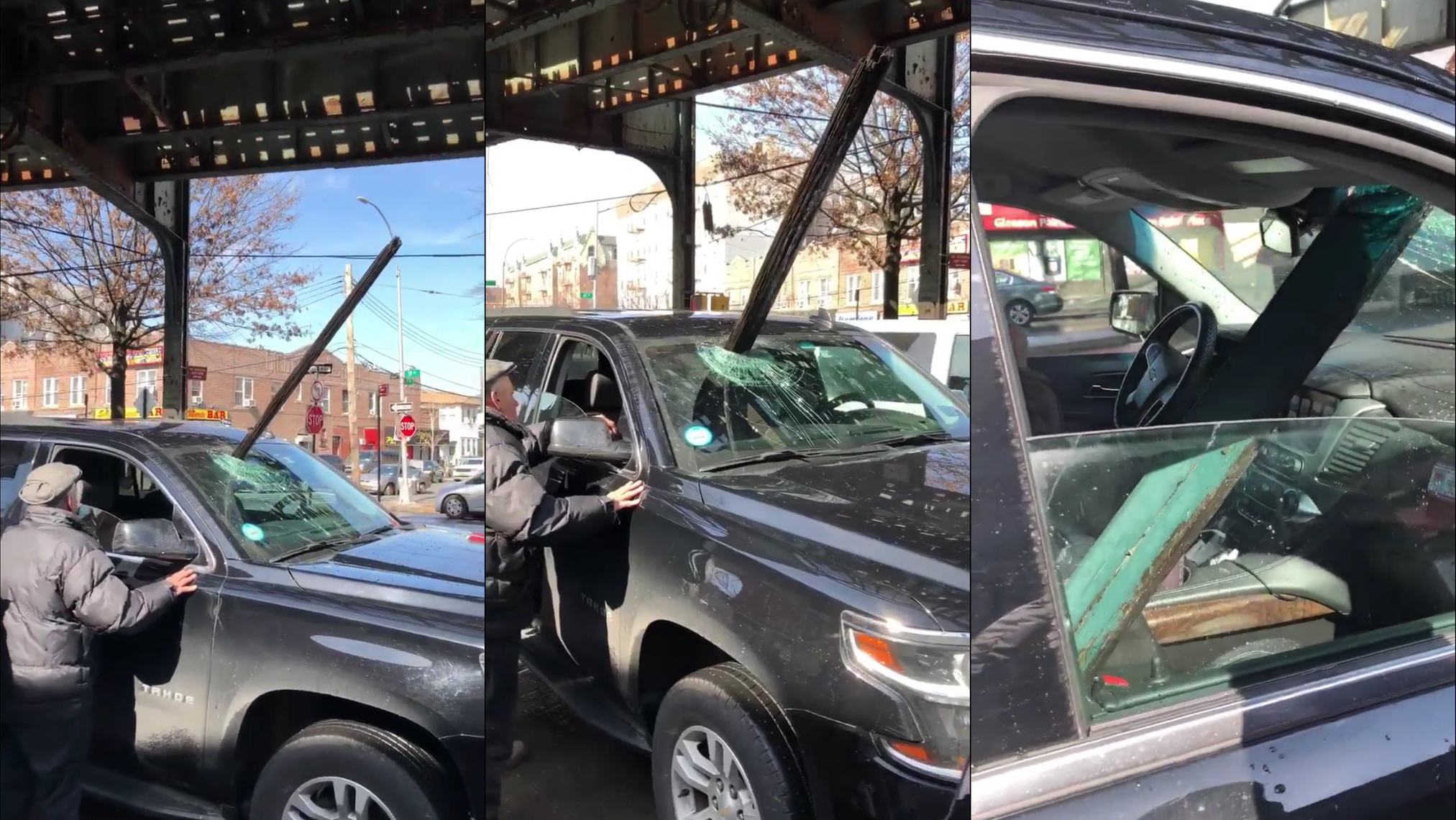 Gothamist says it's scrap from earlier construction work.
From http://gothamist.com/2019/02/21/final_destination_7_train_queens.php:

Transit reporter Aaron Gordon noted on Twitter, "A source tells me the wood is from the girders that support the tracks, not the track or trackbed itself. The wood was probably scrap not properly secured. The tracks have been determined as safe for use."

Less than a week ago, another sizable piece of wood fell, narrowly missing someone, that time inside the Bedford Avenue station for the L train. From Gothamist again (http://gothamist.com/2019/02/15/what_the_l_falling_plywood_version.php?fbclid=IwAR2rw-dpn6QST8vZwZRctTMaScwYG_XV-RnokyXfo-3WOaJxgBSu00gLFTY#photo-1):

She added, "It looked like a pretty solid piece of plywood. It made a huge bang. We all started running because there was a big dust cloud from the plaster. When the dust settled I was talking to people around me and they said it was maybe five inches from hitting me. I’m pretty sure a piece of rebar hit me but I was wearing a winter jacket."

I'd have thought after that the MTA might be looking to secure things that might fall, but maybe they were just checking inside stations.

It's a big system. But I think maybe my fear isn't that irrational?

Apparently vendors of Smart Home devices are under pressure from Amazon and Google to share their data.

All of this data combined and analysed (probably by AI) could give a disturbingly accurate picture of your entire life, and coupled with your phone, it won't just be limited to your home.

As the MBTA makes its plans for AFC 2.0, its new fare collection system, it's important for all of us to keep privacy and due process in mind with a system that as currently proposed will require a one-to-one correspondence between riders and cards.

Certainly the legal framework is different in Massachusetts to what it is in Ontario. I've seen no suggestion that Massachusetts law enforcement intends to use its transit data in this way. Nonetheless, it's always best to get issues like this correct from the start.

Metrolinx, the provincial agency that supplies the Presto cards used to pay for public transit rides in Toronto, has continued to hand over riders' travel history to Toronto-area cops without asking for a warrant.

Law enforcement requests to Metrolinx have mounted steadily, growing by 47% last year, and in 22% of cases, the agency handed travel history over to police without a warrant.

The Toronto Star first revealed this practice two years ago, but despite public outcry, Metrolinx continues to shun the rule of law, instead relying on what it calls "a balance" between "the commitment to protecting the privacy of Presto card users and maintaining the safety and security of the transit system and its passengers."

And now I know what to do today.