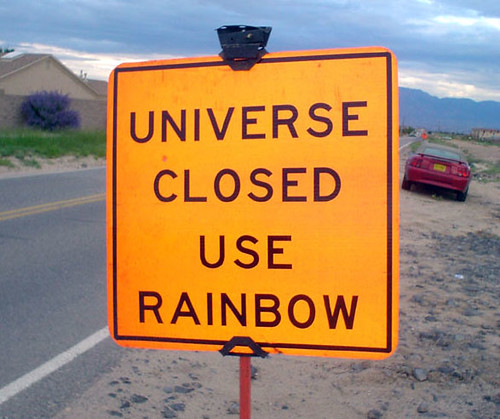 Some years ago, I went to the relevant San Francisco municipal office that sold "Clothing Optional Beyond This Point" signs. The story was that the signs indicating the limits of their nude beach kept getting stolen, so the City and County of SF decided to make up a bunch of them and sell them at the public works office. I thought it was a useful sign and bought one.

Similarly, I think the Albuquerque Department of Public Works should sell this one. According to Brian Arnold, whose Flickr this is on:

"For reference: Universe and Rainbow are two streets in town that are really close to each other. Universe was closed and people were being redirected to Rainbow. It's quite the amusing sign.

"I had originally written that people were being redirected to Paradise, but that's not quite accurate. Paradise is another street in the area, and I have no idea why I thought it was involved whatsoever. :) Odds are good that the photo was taken on Paseo Del Norte. The intersection of Paseo and Universe is here. (http://maps.google.com/maps…)

"I acquired this photo from a friend who got it from a friend. I don't know who the original photographer was, but was informed that my usage was authorized."