The world is full of people doing things you don't like.

Chicago's new Ventra card.
Chicago is having a rather difficult time rolling out its new Ventra fare payment system. Ventra is meant to replace its earlier Chicago Card. This is not going well.

I myself got a Ventra card to replace my Chicago Card.

One of the problems with giving your contactless fare card MasterCard debit card functionality is that it makes the activation process much more complicated. This is for understandable fraud prevention reasons.

As a result, however, the activation process is significantly more difficult than registering a new credit card. This is the case even if you never decide to active the debit card functionality at all.

Here's what I had to do:
( Collapse )
This is a rather elaborate procedure to set up a transit farecard.

I am never going to set up the MasterCard debit facility on this card, not only because I have a bank account and a credit card, but because the fee structure is annoying (pdf). To be fair, it's probably not any worse than most standalone debit cards. But I'm not the intended market for the debit card: all I want is a farecard. So none of the above complexity is a direct part of setting up the debit card account, although I'm sure some of it exists so that the debit card functionality can exist.

I don't have to imagine how this process has been received by other users, because it's been reported in the press.

From a story in today's Chicago Tribune:

CTA fare options that expired this week are back in place until the company that is being paid almost a half-billion dollars to manage the implementation of the new Ventra system fixes problems that have left thousands of customers frustrated, the president of the CTA said Wednesday.

The transit agency made the abrupt, if temporary, reversal in response to angry riders who this week overwhelmed a Ventra hotline in an effort to activate their new cards and in some cases have demanded their old, time-tested fare-payment choices back.

So until further notice, sales of magnetic stripe transit cards will continue at rail stations, and Chicago Card customers will be allowed to add value to their cards. But CTA President Forrest Claypool said Wednesday he is determined to stick to a Dec. 15 deadline to stop accepting the old fare cards on trains and buses.

"The security procedures, in retrospect, were a little too complicated with the access codes," Claypool said.

"That's why we are getting the confusion and that's why we got so many calls to the customer support system, which had insufficient numbers of operators," Claypool said after a CTA board meeting in which the issues with Ventra were not raised.

In response to questions on the issue, Cubic spokeswoman Kim Gregory responded: "Our policy with the CTA is to not answer media questions and refer them to the agency."

Yes, the operator is Cubic Transportation Systems. Yes, the CTA did pay $454 million for the new system.

Keeping a mistress is a normal part of life for successful Chinese businessmen and government officials, and in some ways they have become more visible in recent years, playing roles in corruption scandals and even, sometimes, turning in their lovers.

They and their big-spending partners may also be contributing to ever-increasing real estate prices in some of China’s biggest cities. That’s because these women, often from rural areas, are regularly kept in apartments that their lovers buy for them in urban centers, near his work or home. The practice has created entire neighborhoods of apartments in big Chinese cities filled with women who would otherwise be living at home with their families, or perhaps sharing a rental.

Personally, while I wouldn't minimize the number of mistresses rich officials and businessmen--and I'd put them in that order, in the few cases they aren't actually the same guy--are keeping, I question just how big a problem this is compared to the number of empty apartments have been built. It makes a eye-catching story: "Oh, those corrupt Chinese officials!" but in fact the ideal places for officials* to stash mistresses is someplace convenient to work or home.

Damn few of those places convenient to work or home are out where the ghost cities are. Those empty apartment complexes are empty because of location. Also, no mistress is going to put up with being stuck somewhere out in the sticks: the traffic to get to and from those neighborhoods is absurd. The official would never get to see his mistress and she'd walk out because she couldn't ever get in to town. (The public transit out there isn't ideal either, not that either he nor she would ever be caught dead riding a bus or metro.)

Aside from that, I'd actually claim that this is better than having the buildings empty. At least there's someone living in an apartment, spending money and supporting local services.

No, the real driver behind all this development is that local governments derive their income from land-use fees from developers. The more development, the more land-use fees.

Also, I'm not using the photo Quartz used for this story. The woman pictured is a balloon vendor. (Photo 9 of 10 in a USA Today gallery from February 13, 2012: http://mediagallery.usatoday.com/S183321, by Alexander F. Yuan of the AP, captioned "A balloon vendor sells Valentine's Day balloons in Beijing.")

*In case you're wondering, the majority of officials in China are male, and an even greater majority of those male officials present as straight. Traditional gender roles which reinforce misogyny and homophobia see to that. So yes, it's mistresses.

...it's that when they're faced with a hard deadline, politicians' first impulse is to kick the can down the road.

It's been true in Europe, and it seems to be the same in the States.

It occurs to me that I haven't yet tried to put money on my card.

With #Ventra's convenient vending machines you can check your balance, add value, or smash your head against the side until you pass out! AP file photo, taken June 8th, 1987, of a customer buying a cup of coffee at the last Horn & Hardart Automat, Third Avenue and 42nd Street, Manhattan. (Via Peter Nowak's blog post).
I feel an odd nostalgia for the Horn & Hardart Automat. (digitalemur and I were talking about the neighborhood around the Chrysler Building, which reminded me of the Automat.) I say odd because I didn't get to eat there much. In any case it wasn't the food that was memorable.

My Dad originally suggested I stop in when I was in Manhattan. By the time I got a chance to eat there its glory days were long over. By then the food wasn't particularly good, and despite its prime location--now a CVS pharmacy--it wasn't very busy the few times I got to eat there before they closed. It was cheap, though, which meant that poor people often hung out there as there weren't staff to chase them away.

I was fond of the whole nostalgic, Art Deco feel of the place. The whole coin-operated concept was cool, in a retro-modern way, even if the doors occasionally stuck. I sometimes had to jiggle them to get them open, and I worried I'd lose my tokens if I couldn't.

I must have realized at the time that the automat was dying because I bought a couple of tokens, one brass and one silver-colored, just to keep as souvenirs. 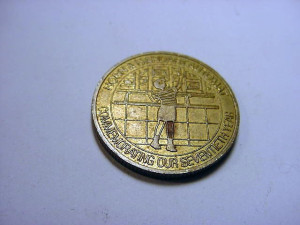 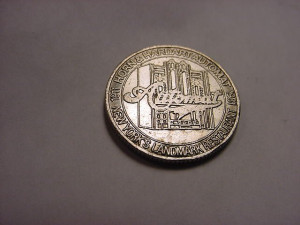 (Not my tokens.)
I missed last winter's New York Public Library exhibit on the Automat, but that's really okay. It's not like they were actually selling food out of the machines. It wouldn't have been the same just to look at the machines and maybe take a recipe or two.

Competition from fast food forced cost-cutting in response. Ultimately that killed the Automat. Horn & Hardart closed the central commissary on the West Side which made freshly-made food every day when their remaining New York locations could no longer support it. The food quality never recovered.

The Automat was yet another small part of the New York of the '80s that helped to form my concept of a real city. So I miss it, the way I miss a lot of long departed New York.
FEBO in Amsterdam still has similar machines, but how many frikandellen and krokets can you really eat? FEBO's machines vend fried snacks for the crowd at closing time. Horn & Hardart had real food. Besides, the last time I went to a FEBO their change machine ate one of my €1 coins and the guy behind the counter was annoyingly unsympathetic.
Collapse