Coverage of the recent fistfight on Everest on the one hand and the celebrations of the 60th anniversary of the first ascent on the other have reminded me of an bad idea I thought of a while ago for the North Face of Everest. 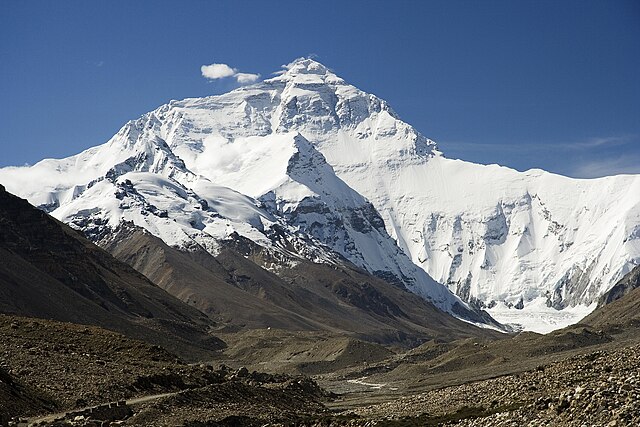 (North Face of Everest, from Wikimedia)

The Chinese have already been planning to extend their railway from Lhasa towards Nepal and Bhutan. That plan predates the breakup of the rail ministry and the sacking and arrest of its empire-building boss, Liu Zhijun, for corruption. Some railway plans have been put on hold as a result.

It would be very much in the boomtown character of modern China if they built a funicular to the top from the Tibetan side. (This would connect to the railway from Lhasa.) I am not the first to come up with that idea. In fact, someone else even used it in an entrepeneurship presentation last year.

Neither of those guys seems any more serious than I am about it--the first site is at halfbakery.com--but I do have an additional detail to add to the project which I think would speak directly to modern nouveau-riche Chinese sensibilities: a rotating dim sum and seafood restaurant at the peak.

Add a gift shop in the center, selling Chinese-made tchotchkes, and perhaps even a small hotel casino--the Highest Table Gaming in the World--and this plan is complete.

I am somewhat relieved to find that a Google search for "珠穆朗瑪峰" "纜索鐵路" ("Everest" "funicular railway") returns nothing relevant. (Although after I post this, it will come up in a Google search.)