Counterfeit British one pound coins have been a problem for a number of years.

From an article in Significance Magazine.
In all the years I visited the UK I'd never found a fake pound coin. I was either lucky or insufficiently attentive, possibly both. A couple of weeks ago I finally got a coin that I recognized as fake. I thought I'd take a few side-by-side photos of this particular counterfeit next to a pound coin of the same date I believe is real.

In the images below the counterfeit is on the left and genuine coin is on the right. Click on an image to enlarge it. 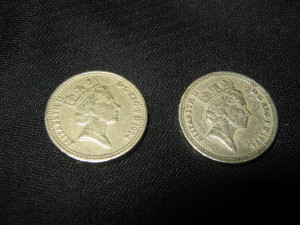 Obverse (front)
There is a slight color difference, but more or less within normal variation for pound coins. 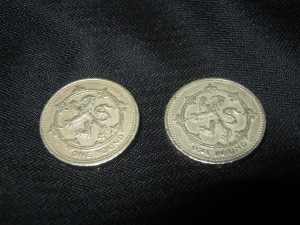 Reverse (back)
I tried to preserve the rotation of each coin as I turned it over. The fake coin is slightly out of alignment, but not to an obvious extent.

Two photos of the edge: 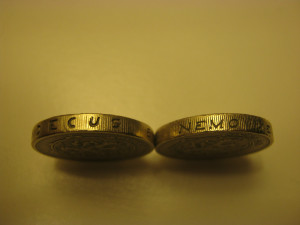 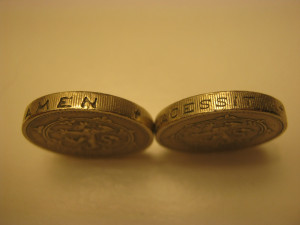 The reeding (graining) on the edge is fainter and uneven on the fake. The inscription is also crudely lettered compared to the real coin. Worse yet, it is the wrong motto. On a real 1994 pound coin, the edge should read "NEMO ME IMPUNE LACESSIT". Instead, it reads "DECUS ET TUTAMEN", which has been used in other years, but not in 1994.

Both coins make a similar dull thud when dropped onto a table, as pound coins do.

I have not weighed the two pounds but there is no discernable difference in heft when held.

The BBC says many fakes work in vending machines.

mrreid.org provides a convenient link to a WolframAlpha calculation of the current metal value of a pound coin. Currently, that calculation estimates that the face value of the pound is about twenty times the metal value. That large difference is evidently enough to attract counterfeiters.
Collapse